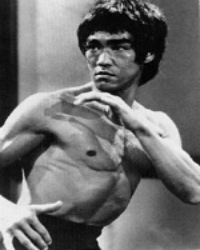 Bruce Lee, born on 27 November 1940 was an extraordinary martial artist, martial arts instructor, philosopher and filmmaker, he mysteriously passed away on 20 July 1973. Bruce Lee is famously considered around the world to be one of the most influential martial artists of all time and an icon of the 20th century.

The largest influence on Bruce Lee's martial arts development was his study of traditional Wing Chun Kung Fu. Bruce Lee began training Wing Chun at the age of 13 under Grandmaster Yip Man in 1954. Yip Man's classes generally consisted of Forms Practice, Chi Sao Drills, Wooden Dummy Techniques and Free-Sparring. Bruce Lee is believed to be one of fewer than six people in the entire Wing Chun system to be personally taught by Yip Man.